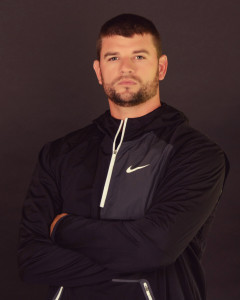 Coach Goff, a 2000 graduate of Fitzgerald High School, was a tri-athlete who excelled in wrestling, baseball, and football. He was at 3x Region Champ and 2x State Placer. After graduation, Coach Goff attended Southern Polytechnic State University in Marietta on a baseball scholarship. In 2004, his senior season, Southern Poly won the Conference Championship; Evan was honored with the Offensive Player of the Year award with at .392 batting avg. Coach Goff holds a BS degree from Southern Poly (now Kennesaw State University) in Management and a MEd from the University of Georgia in Kinesiology.
Coach Goff was a 4x Region coach of the year winner in his seven seasons at the helm of the Roswell wrestling program. In 2015 he took the head wrestling job at Colquitt and helped get that program off the ground for two years before taking the West job in 2017. In his first three years at West he has already lead the team to three region championships and a top 3 finish at both state duals and traditional. For the 2018-2019 school year, he was named Coach of the Year for West Forsyth.