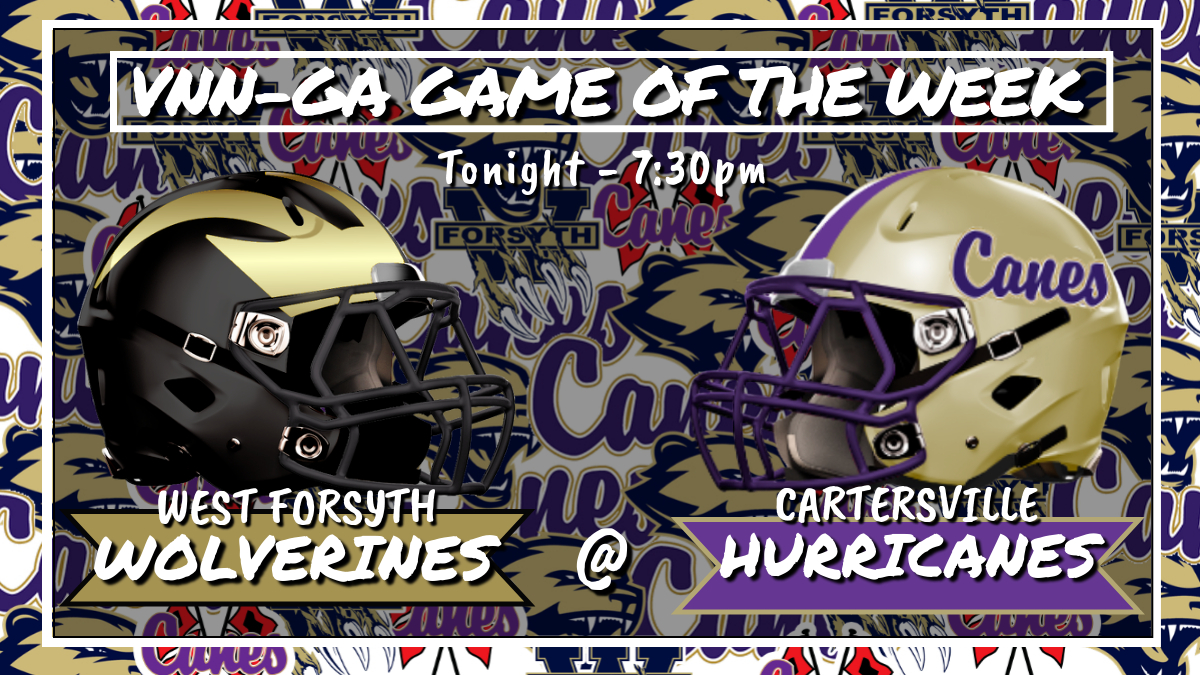 Don’t have a ticket, there are options –

Week 2 in brings us an awesome match up! This week’s VNN-GA Game of the Week preview looks at the West Forsyth Wolverines on the road to take on the Cartersville Canes at Cartersville HS tonight, 9/4 at 7:30 pm.

The Wolverines are 1-0 coming off an impressive Corkey Kell victory over the Mays Raiders 42-6. West Forsyth Head Coach Dave Svehla is in his 1st year at WFHS and looking to continue their hot start. Their efforts this week will center around key players RB Daba Fofana, TE Oscar Delp & QB Keegan Stover. All 3 had tremendous nights against Mays in the kickoff classic.

The Cartersville Canes are led by Head Coach Conor Foster who is entering his 2nd year as the Canes head man. Cartersville is also 1-0 after starting the year with a 42-0 victory over the Morrow Mustangs. Standouts in the victory and sure to play key roles tonight are RB Quante’ Jennings Jr. & QB Stratton Tripp.

I recently had a Q&A with both coaches discussing the start to the season & tonight’s game.

What is your biggest area of concern about your team heading into the second game?

Coach Svehla – “Being able to block and tackle the athletes that Cartersville has.“

Coach Foster – “Our main concerns are developing depth and continuing to improve our fundamentals in all three phases of the game. West Forsyth is a tremendously talented, well coached, and deep football team. In order for us to be successful we will have to have relentless effort and improved execution in all three phases.“

What has been your team’s strengths that have come to light during your preparations for the season and/or week 1?

Coach Svehla – “Our kids play hard defensively and run to the ball. Offensively, we want to continue to be physical.”

Coach Foster – “Our team strength that has come to light has been our maturity. We have been very pleased with the way that our young men continue to respond to adversity. They have accepted the challenges of this very unique off-season without complaint. I am thankful for a tremendous coaching staff, administrative team, and senior leaders that created and executed a well-organized plan for return to play.“

Has anyone or anything stood out as the most surprising or unexpected positive during preseason workouts and/or week 1?

Coach Svehla – “Jay Hellstone, our NG, had a really nice game vs. Mays. He is quick and active, and I liked the way he pursued the football.“

Coach Foster – “Our kicking game is improving. This was an area of concern last season, and our coaches and players have attacked the issue throughout the off-season. There is still a lot of work to be done, but self-reflection, humility, and work ethic has led to marked improvement.“

Any final thoughts on the game, the season?

Coach Svehla – “Cartersville is Cartersville, meaning they are going to be talented and well-coached. The know how to win, so our kids are going to have to play great football to have a chance.“

Thanks to both coaches for their time & input. Looks to be a tremendous game, wishing both teams well in tonight’s match up!